As I’ve done in years past (2013, 2015, 2016), I’ll be tracking my conference tournament predictions against those of both KenPom and Team Rankings. The predictions for the early tournaments are up here on Google drive and I’ll add the remaining tournaments in once their brackets are set.

But while we wait and see how the projections will fare, I want to explain what my rooting interests will be during Championship Week.

While the big conferences wait until this coming week to kick off their tournaments, the real drama comes from the small conference tournaments, which all of the early-start tournaments are. Except for the WCC (Gonzaga and Saint Mary’s) and the MVC (Wichita State and Illinois State), these are likely 1-bid conferences–there are no at-large bids to fall back on. That means some schools that are clearly the class of their conference have to prove it one more time to punch their ticket to the dance.

I’m partial to these teams as not only are they deserving to represent their conferences in March, but they also provide the best chance for the upsets we’ve all come to love so much.

To try and quantify this, I’ve created a simple metric to identify teams that I most want to root for during Championship Week. The idea is simple: I want teams that (1) can pull off an upset in the tournament, (2) are from conferences that are unlikely to pull off a March upset if some other team wins the conference tournament and (3) likely won’t get an at-large bid. 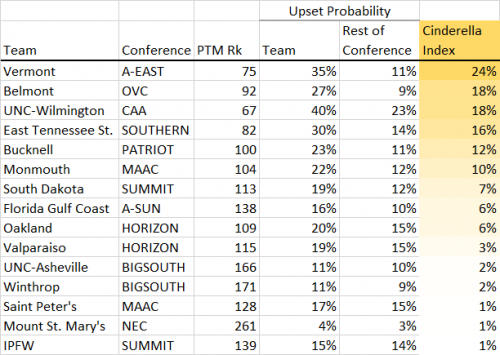 Here is how to read the chart using Vermont’s line as an example: The Catamounts are in the America East conference and rate as the 75th-best team by my Predict the Madness “true strength” rankings. If they win the A-East tournament, they would have a 35% chance of pulling off a March upset, but if they lose, the conference representative will have, on average, just an 11% upset probability. That’s a difference of 24%, which is their Cinderella Index.

After the top 6 teams, the CI drops off a bit. Some teams have a large gap between themselves and the rest of the conference, but aren’t as strong of a team so they are less likely to pull off an upset, thus lowering their CI. Florida Gulf Coast is a decent example of this, though Texas Southern is the best example (the SWAC kicks off their tournament this coming week). Texas Southern actually has the largest raw difference between them and their conference foes, but they are still ranked outside the top 200 themselves, so a big upset is still unlikely.

Other teams are quite strong, but there is not much separating them from the teams right behind them. Oakland is right near the top 100, just behind Bucknell and Monmouth. However, there CI is barely half as large, mostly due to the presence of Valparaiso who rates just 6 spots lower than the Grizzlies and is the most likely conference champion if Oakland falters. Even the next trio behind them–Northern Kentucky, Green Bay, and Wright State–all rate in the top 175. For comparison, the Patriot league has no other teams behind Bucknell in the top 150 and just one team (Lehigh at #153) in the top 190.

Alas, things don’t always turn out as planned and the chaos of March has already claimed it’s first victim among my Cinderellas as Belmont, the #2 Cinderella Index team, has already been upset in the OVC tournament.

Here’s hoping Vermont, UNC-Wilmington, East Tennessee State, and the rest of the potential Cinderellas can avoid that fate and take their best shot at the big boys in a couple weeks. I’ll certainly be rooting for them.