Today, the NCAA Selection Committee put out their first ever in-season preview, releasing the current top 16 if the season were to end today. Let’s see how they did.

First, here is their s-curve alongside my own Achievement Rankings, ESPN’s Strength of Record rankings, and ESPN’s current bracketology seeds. 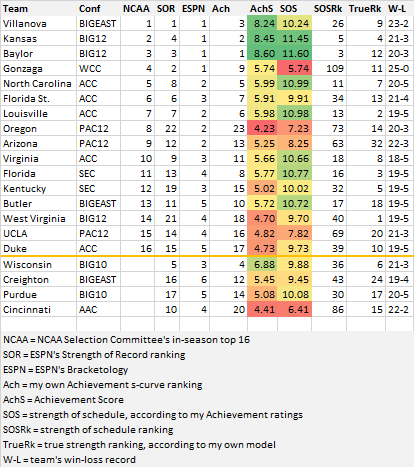 The top of the committee’s bracket is hard to quibble with. I had Villanova, Kansas, and Baylor as a clear top 3, and they were the committee’s top 3 as well, albeit in a slightly different order. Gonzaga is the type of extreme team that can cause discrepancies among different systems with their gaudy record and middling schedule. For my system, teams like that are much more sensitive to where the “baseline” is placed. ESPN’s Strength of Record (SOR) has Gonzaga 2nd overall, so I have no quibbles with their placement.

The next three teams–North Carolina, Florida St., and Louisville–all ranked between 5th and 8th in all 3 systems. Overall, 15 of the committee’s top 16 ranked in the top 18 of my system, and 14 of their teams were in the top 19 of ESPN’s SOR. On the whole, the committee seemed to do a pretty decent job.

The Bad – Oregon vs Wisconsin

Except I have no idea what they were thinking on Wisconsin and Oregon. The Badgers, who rank 4th in my system and 5th on ESPN’s SOR, were somehow left completely out of the top 16. Even ESPN’s Bracketology has them comfortably in the top 16 as a 3-seed. In the table above, I’ve listed Oregon with just 3 losses as I haven’t yet included the UCLA loss from Thursday night, which would hurt the Ducks even more.

Here’s the simple argument for Wisconsin over Oregon: better record against a harder schedule. Here’s the more elaborate argument: Oregon’s best win is @ Utah (according to my methodology, you can argue for a home win vs UCLA if you’d like). Wisconsin has 3 wins better than that. Oregon has two rather bad losses–@ Colorado and Georgetown at a neutral site–games that an average tournament team wins just a bit less than half the time. Wisconsin’s 3 losses (N-UNC, @Purdue, @Creighton) are about as inconsequential as losses can be. In fact, if we compare these teams all the way down the board–pit their best wins against each other, 2nd best wins, etc. all the way down to their worst loss–Wisconsin comes out on top nearly the whole way through. The lone exception is the very back end of each team’s wins, where Wisconsin’s cupcakes were a bit more cupcake-y than Oregon’s. 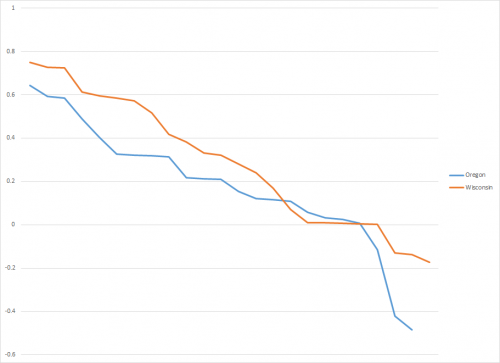 Hey, I’m a Pac-12 guy, but I just have no idea how any objective look at these two resumes puts not just the Ducks ahead, but Oregon at #8 and Wisconsin outside the top 16. This isn’t even a case of the committee rewarding a “better” team over a “more deserving” one as both my true strength ratings and KenPom’s have Wisconsin comfortably ahead as the “better” team.

There’s still plenty of time for the committee to re-evaluate and sort things out before the real Selection Sunday next month. Overall, besides the egregious Wisconsin/Oregon error, I feel the committee did a solid job with their early look. I’ll give them a B-, not bad for their first attempt at an in-season release.