To Knee or Not To Knee

Unless you’ve been living under a rock, you’ve heard that the NFL moved the kickoff line forward 5 yards to the 35 yard line. The hope is that this will result in more touchbacks and, therefore, fewer injuries due to fewer returns.

With more kickoffs going into the end zone, returners are faced with many more decisions. With apologies for the poor title of this post, the question still remains for returners: Should I take it out, or take a knee? I’m going to try to shed some light on the returners’ decision.

In the past, with the kickoff line at the 30, kickoffs that went to the goalline were returned on average to the 25 yard line. To estimate where we’d expect returns to go this year, we want to do it based on how far the kickoff goes, NOT simply where the kick ended up. Mainly, this is because the kickoff coverage is 5 yards closer. Another factor is that the average hangtime on kicks is based on kick yardage as well. Take an example: I just stated that returns from the goalline in the past were returned 25 yards. Should we expect returns from the goalline now to go 25 yards? No. We’d expect them to be shorter since the coverage team will get their faster and the hangtime will be longer as the kick is only traveling 65 yards, not 70.

Let’s take a look at the average return based on where the returner catches the kickoff. 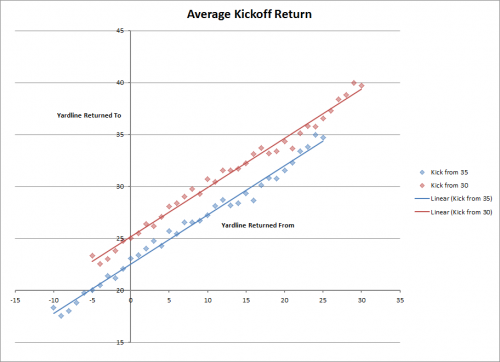 Based on the chart above, you can see that the kick returner can expect to get to the 20 yard line or further all the way back to 5 yards deep in his own end zone. Based on this evidence, kicks caught 6 yards deep or further should be kneed, and all others should be taken out.

Before we accept that s our answer, let’s look at from the perspective of Expected Points. Average return yard line is a good first step, but EP will be able to capture more by looking at the actual distribution of returns.

The story remains the same. Right around 5 yards deep in the end zone is cutoff point for taking the kick out. 1st and 10 from the 20, which is what the offense would get on a touchback, is worth about 0.32 points. A return from 5 yards deep is almost exactly the same.

The final factor I want to discuss is that the “average” kickoff return obviously includes all returners, good, bad, and everywhere in between. In the past, there were few decisions to be made. Any kick caught outside the end zone should obviously be returned and the few that traveled into the end zone were likely not deep enough to matter. Almost all kickoffs should have been returned in the old format. If the average return from the goalline was 25 yards, this likely included the Devin Hesters of the world averaging more than 25 yards, while poorer return units like that of my Indianapolis Colts were likely below 25.

In this new system, the weaker units can choose to take a knee more often, while the better returnmen–who likely have much higher value than the average returner–can take it out much more often, perhaps even 8 or 9 yards deep in the end zone. In the end, we should still see plenty of kickoff returns this season, especially from the most exciting and explosive return guys.

8 Responses to To Knee or Not To Knee