It’s time to re-introduce the Achievement S-Curve for the 2013 season. For those of you that are new, I’ll give a quick recap in this post but check out previous posts that go into more detail about the system (try this and this and this for starters).

The Achievement S-Curve is a descriptive rating system that attempts to rate teams based on what they have accomplished. It is a subtle yet important difference from a predictive rating system. While a predictive system attempts to answer the question “who would win if these two teams played today?” a descriptive system answers “who has accomplished the most in the games they’ve already played?”.

An example is probably the best way to demonstrate the differences between the two systems. Let’s take a real-life example. My predictive rating system says that New Mexico is the 33rd best team in the country. That is, there are 32 teams I’d favor over the Lobos, but I’d pick them to beat every other team. Pitt, meanwhile, is the 7th best team. Only six teams in the nation would be favored over the Panthers today. However, New Mexico is 22-4 against the 29th-hardest schedule thus far while Pitt hasn’t fared as well with a  20-7 record against a very similar schedule (24th-most difficult). It is clear that New Mexico has “achieved” more thus far this season than Pitt has. The Lobos have earned a higher seed than Pitt, despite the fact that Pitt would beat them more times than not.

The Achievement Ratings work by first looking at the difficulty of a team’s schedule. Schedule difficulty is measured by how many losses an “average tournament team” (think of this like an 8 or 9 seed; examples this year are Notre Dame, UNLV, and Oregon) would have against the opponents the team in question has played. Location is also a factor, playing @ Indiana is more difficult than playing the Hoosiers at home. New Mexico’s SOS this year is 8.5, meaning a baseline team would be expected to win 17.5 and lose 8.5 games against UNM’s schedule. Pitt’s SOS is slightly harder at 8.7.

Next, we compare how many wins and losses each team actually has. New Mexico has 22 wins and just 4 losses, which is 4.5 more wins (or fewer losses) than expected, so their Achievement Score (AchS) is 4.5. Pitt has been good, just not as good as New Mexico, and their 20-7 record is just 1.7 games (8.7 minus 7) better than expected, for an AchS of 1.7. New Mexico’s 4.5 score is good for 7th in the nation currently, and a #2 seed in my bracket, while Pitt comes in at 26th which translates to a #7 seed.

With the particulars out of the way, let’s see what the Achievement S-Curve looks like. The Achievement S-Curve is simply the Achievement Ratings translated into bracket form. The top 4 teams are the #1 seeds, the next 4 are #2 seeds, etc. Automatic bids are awarded to the team in each conference that has the best predictive rating. Since conferences (except the Ivy) award their automatic bids to tournament champions, it is more likely that the best teams will win it and not the current teams that have achieved the most (there is actually a better way to do this that accounts for not just the quality of the team, but also it’s current conference play to-date, the structure of the conference tournament, and the standing of the rest of the conference’s teams…more on that later).

Here’s the current Achievement S-Curve. Automatic bids are listed with their conference in parentheses. (Click to zoom.) 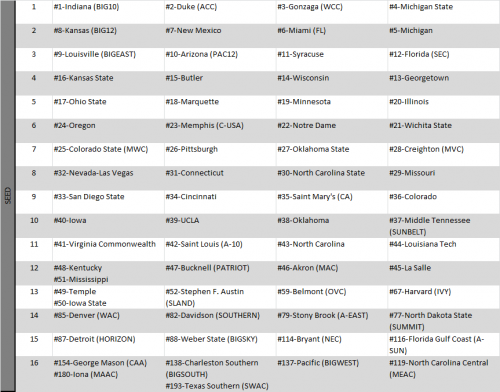 If you prefer more information, here’s a full table with all the information. The first column is the overall Achievement Ranks for all 347 teams; the second column is only for the 68 tournament teams. “Pred Rk” is the ranking of the team in my predictive system. The final column is ESPN’s Bracketology seed for comparison. It’s a big table, so scroll horizontally to see all the columns.

How teams currently stand is all fine and good, but what we really care about his how they will end up. To do that, I simulate all remaining games including conference tournaments, then calculate an Achievement S-Curve for each of the 1,000 simulation runs. This combines how a team has done thus far with how we expect them to do going forward based on their ability, their schedule, and their conference tournament.

This post is already getting long, so I’ll leave some of the analysis to you this time. Next time, I’ll take a look at some discrepancies between my system, Bracketology, and predictive rankings. We’re just days away from the best month of the year…