About half of the automatic bids are still up for grabs this weekend, but the NCAA Tournament picture is starting to take shape. It’s time for one last Achievement S-Curve update. As always, the full ratings can be found here. All data updated through Friday, March 9th. Click to view bigger. 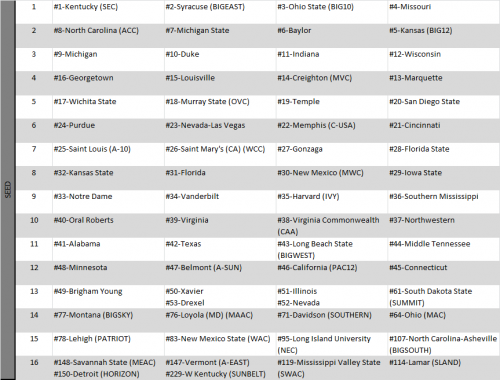 Let’s take a look at some of the biggest discrepancies and see what we can learn.

What is up with the Big Ten?

Most of the big discrepancies between my S-Curve and Bracketology’s have to do with the Big Ten. I have Ohio State, Indiana, and Wisconsin all one seed line higher; Purdue 4 seed lines higher; and, most glaring of all, Northwestern, Minnesota, and Illinois all in while Lunardi has them all out.

This table shows one of the big reasons why. Nearly every Big Ten team has underachieved so far this season, as represented by their “true strength” rank being better than their Achievement Rating rank. The way that my Achievement Ratings work, teams are evaluated against the true strength of their opponents, while RPI uses just opponent wins and losses. This is likely a big reason why my system rates all Big Ten teams higher–it sees their schedule as tougher than the RPI and other similar systems see it.

There are two sets of teams where the ASC seems to differ from the consensus view, and they are on opposite extremes: teams with poor records but difficult SOS and teams with gaudy records and middling schedules. Examples of the first type of teams are the Big Ten squads I just mentioned: Northwestern, Illinois, Minnesota. On the other side are Oral Roberts, Middle Tennessee, Nevada, and Drexel who all posted great records but against schedules ranked outside the Top 150. It’s possible that my system doesn’t handle the extreme cases as well, perhaps something to check later. For the most part, these are among the last teams in and are replaced in most other brackets with teams I have among my first teams out.

The most egregious differences though are Mississippi State and Colorado State. Both of these teams have 11 losses against schedules ranked in the 70s that an average tournament team would expect to only have 9 or 10 losses against. Let’s compare both these teams with Northwestern, who has 2 more losses but a much tougher schedule. 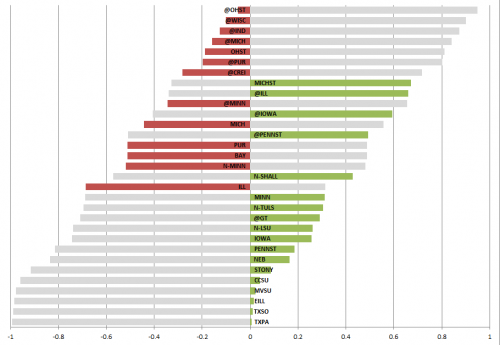 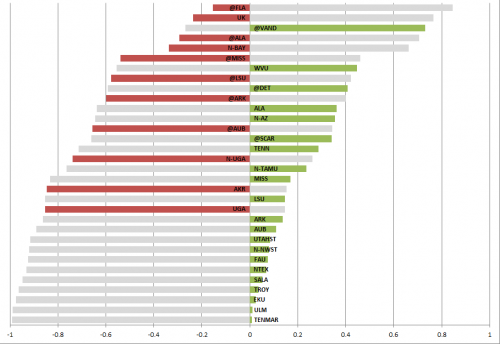 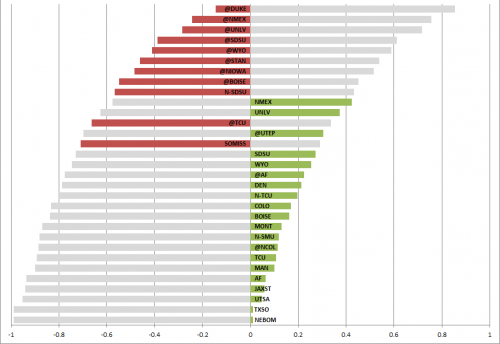 Mississippi State has the best win of the bunch, @Vanderbilt, but Northwestern has 5 wins as good or better than the Buldogs’ next best win, at home against WVU. It’s not like NW is stockpiling bad losses either–in fact, that’s MSU who has 7 losses in games an average tournament team would be expected to win (any time the red or gray bar on the left side of the graph is past -0.5 means a baseline team would be expected to win over 50% of the time). The Wildcats have just one such loss. Add it all up and Northwestern peformed over 2 games better than Mississippi State factoring in their schedules. That’s a chasm, even with the caveat about the Big Ten from before.

Colorado State is a slightly different case. They have no terrible losses or great wins. What is likely happening in evaluating them is that they are getting too much credit for beating New Mexico, UNLV, and SDSU at home while not getting docked enough for losses to overrated teams like Southern Miss and San Diego State.

These are cases where our brains are just not as good as a computer at summing up a ton of information. We’re smart and try to break it down into manageable chunks like Record vs. Top 50 and big wins and bad losses. But that just lets more errors enter the equation. We don’t see that winning at Iowa is actually better than beating New Mexico at home. We aren’t able to quantify the “middle” of a team’s schedule–their wins outside the Top 50 and their losses against top teams and the impact of the location on those games. My system is not perfect, but it’s objective and consistent and can be modified to include things like extra credit for big wins or bonuses for conference titles in a consistent, logical way.

Changing gears, there are a few teams at the bottom of the bracket this year that should frighten the top seeds if they find themselves paired up this March. First and foremost is Belmont, who I see as the 26th-best team in the country. Should they draw the 14-seed Lunardi projects them for, that would make them the best 14-seed according to my rankings in the past 10 years. South Dakota State is my 65th-best team and could slide to a 14-seed and be dangerous as well. Here are the best 5 #14 seeds since 2002:

New Mexico State needs to beat Louisiana Tech today to win the WAC automatic bid, but as the 67th-best team in the nation, they’d be the best 15-seed in recent history should they slot in there. Lehigh at #90 would be a tough draw for a 2-seed as well. The 5 best #15 seeds since 2002:

Finally, the ever-elusive 16-over-1 upset could have a couple of its best shots this season. Horizon champion Detroit and newly-crowned Southland champion Lamar could be the two best 16-seeds of the past decade. Lunardi has Detroit as a 15, but Lamar looks to be on that bottom line. Watch out 1-seeds (kinda). The best #16 seeds since 2002:

Luckily, in about 24 hours, we can all stop debating who should be in and where they should be seeded as the committee will make a final decision. And in a few short days, we’ll all settle in and watch these teams settle it all on the floor. March Madness, one of the greatest times of the year. Can’t wait.