I will try to update this every week, though I won’t provide nearly as much commentary. For an introduction and explanation, try these three posts.

This week, I’ll get right to it with the chart. As always, the full S-Curve with additional information can be found here.

This week, I’ll tie in some comments about this week’s ASC as examples for what are the main differences between my ratings and ESPN’s Bracketology by Joe Lunardi (and other similar “bracketology” predictions).

Let’s take a closer look at this last point. I have West Virginia and Middle Tennessee St. right next to to each other on the S-Curve with both as 6-seeds. Lunardi has them nine seeds apart, with WVU as a 3 and MTSU as a 12 seed. 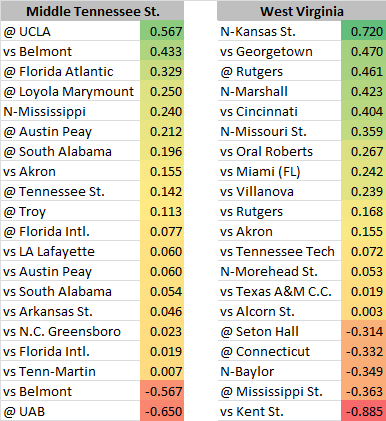 While MTSU is not getting enough credit for road wins at UCLA, FAU, and LMU or a home win against Belmont, West Virginia must be getting huge credit for wins against Georgetown, Cincinnati, and Kansas State. As I pointed out last week, location is huge, and MTSU has 5 of its 7 best wins on the road. West Virginia, on the other hand, has just one–at Rutgers. Additionally, the Mountaineers have 5 losses compared to just 2 for MTSU. Clearly, strength of schedule plays a huge role in this, but how much? Luckily, ASC is made perfectly for this.

The strength of schedule that the ASC outputs can be read as “how many losses would a baseline team (i.e. average tournament team) expect to have against this schedule”? Middle Tennessee St.’s easier schedule says just 3.8, while West Virginia’s harder schedule says 6.8–a difference of 3 losses expected. West Virginia is 15-5 and Middle Tennessee St. is 18-2–also a difference of 3 losses. Awesome. The Blue Raiders should be expected to lose 3 fewer games than the Mountaineers and they have, meaning the teams have accomplished a similar amount thus far. To get a 9-seed difference is a big problem.

Next week, I’ll go into further detail of how strength of schedule and win-loss record interact in the ASC ratings.